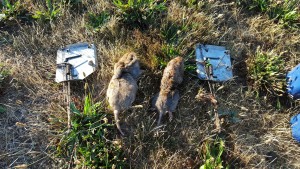 Trapping is not only for fur but damage control. Many trappers will trap rodents or other nuisance animals. These are 2 gophers I trapped this week, it’s all trapping . For those of us that are trappers 24/7 365 we spend a lot of time educating ourselves on the animals behavior for which we trap. A beaver, nutria  or coyote are really no different then a gopher. You need to  learn their habits what they eat and what they do to effectively trap them.  You can make many mistakes while you figure out these animals but they can only make one mistake. As a trapper you want to do your best not to educate the animal you are trapping a coyote or a beaver for example can become very wary  if you miss them with a trap, Even a raccoon will learn to step over a pan in a cage trap after being caught and released by a home owner after being moved.

19 thoughts on “Off Season”